Gardner jumps right into the data releases that came out in August and starts with the new housing permits and starts. New home permits (single family permits) fell by 17% in July and they have been heading backwards since March. Although we have seen a pull back over the past few months the trend is actually heading higher since we emerged from the financial crisis back in 2011. 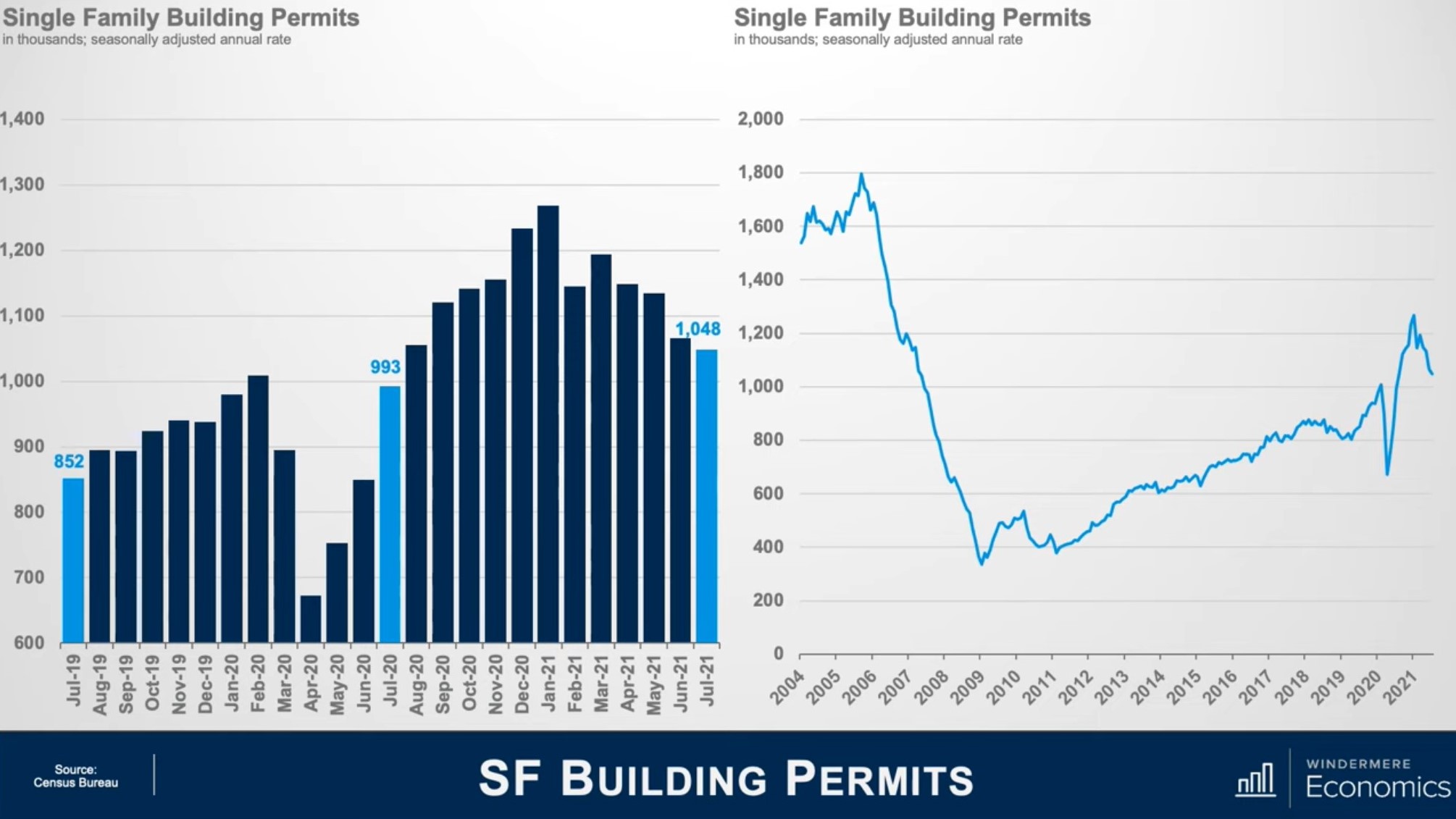 The slow down in permits has impacted housing starts, which dropped by 4.5%. Starts fell across most regions with the exception of the West which increased by .9%. Gardner's perspective is that the longer term is still improving, but not to the degree needed to address the massive housing shortage that the country faces. The number of homes actually being built rose by 1.5% in July, which is 33% higher in the same time a year ago. 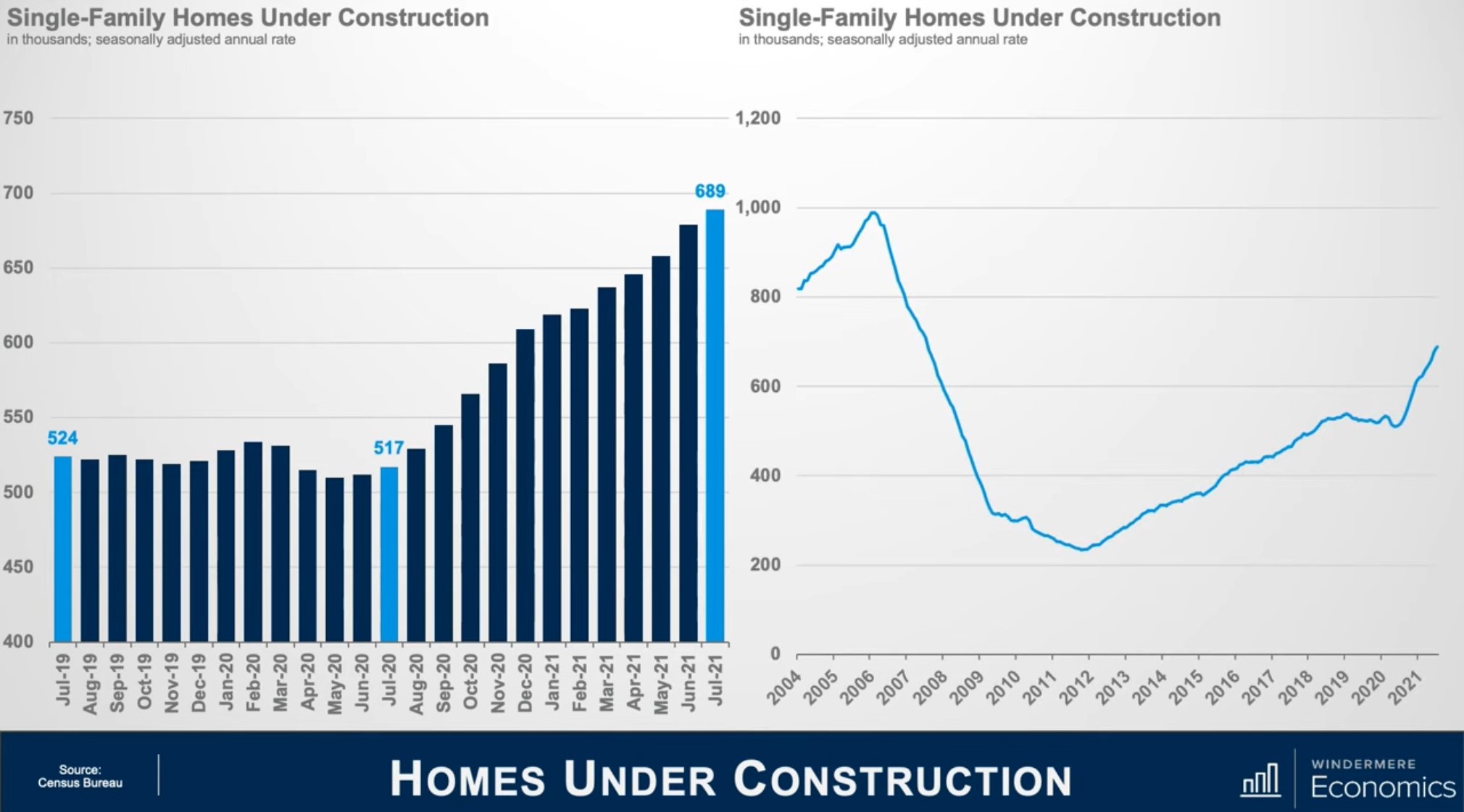 The pullback in housing starts is not a surprise given the permit activity, but despite this, the overall pace of new home building actually remains relatively healthy with a six month moving average of homes under construction coming in above the pre-pandemic trend. Although there is a rise in material costs and affordability challenges, the fundamentals for home building remain solid.

Additionally, a recent ease in mortgage rates and a significant pull back in lumber prices (which have fallen sharply and are back to pre-pandemic prices) also provides support for growing new construction activity.

Moving on to new home sales in July, the number of homes for sale continue its upward trend and have risen by 5.5% versus June and is up over 26% compared to last year. The jump in listings was driven by a record rise in homes for sale that have yet to be built, which counted for over 29% in total inventory. 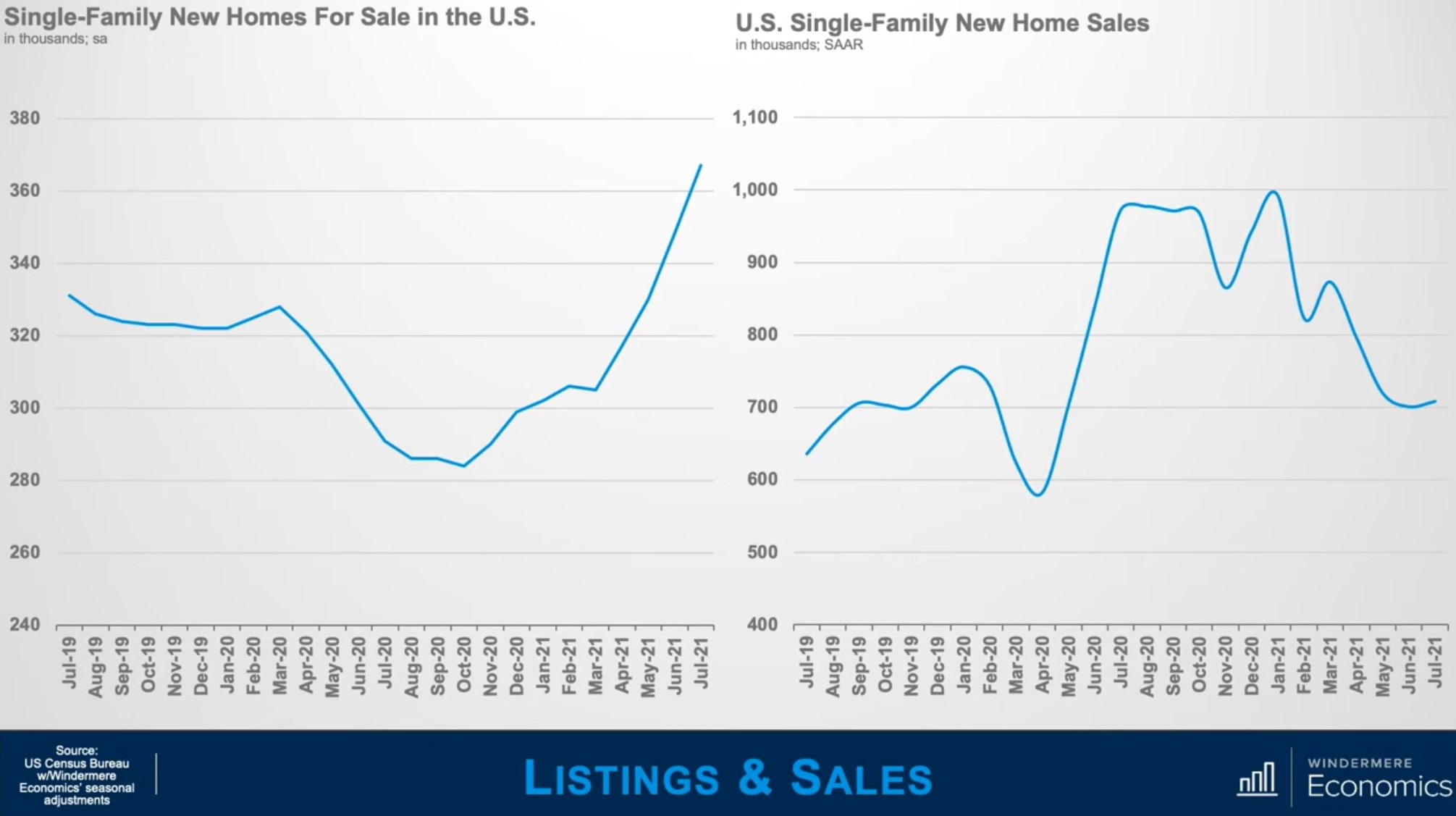 With more demand than new supply, Buyer's turn their attention towards the existing home market. For the fifth month in a row inventory levels ticked higher and the number of new listings are up year over year. 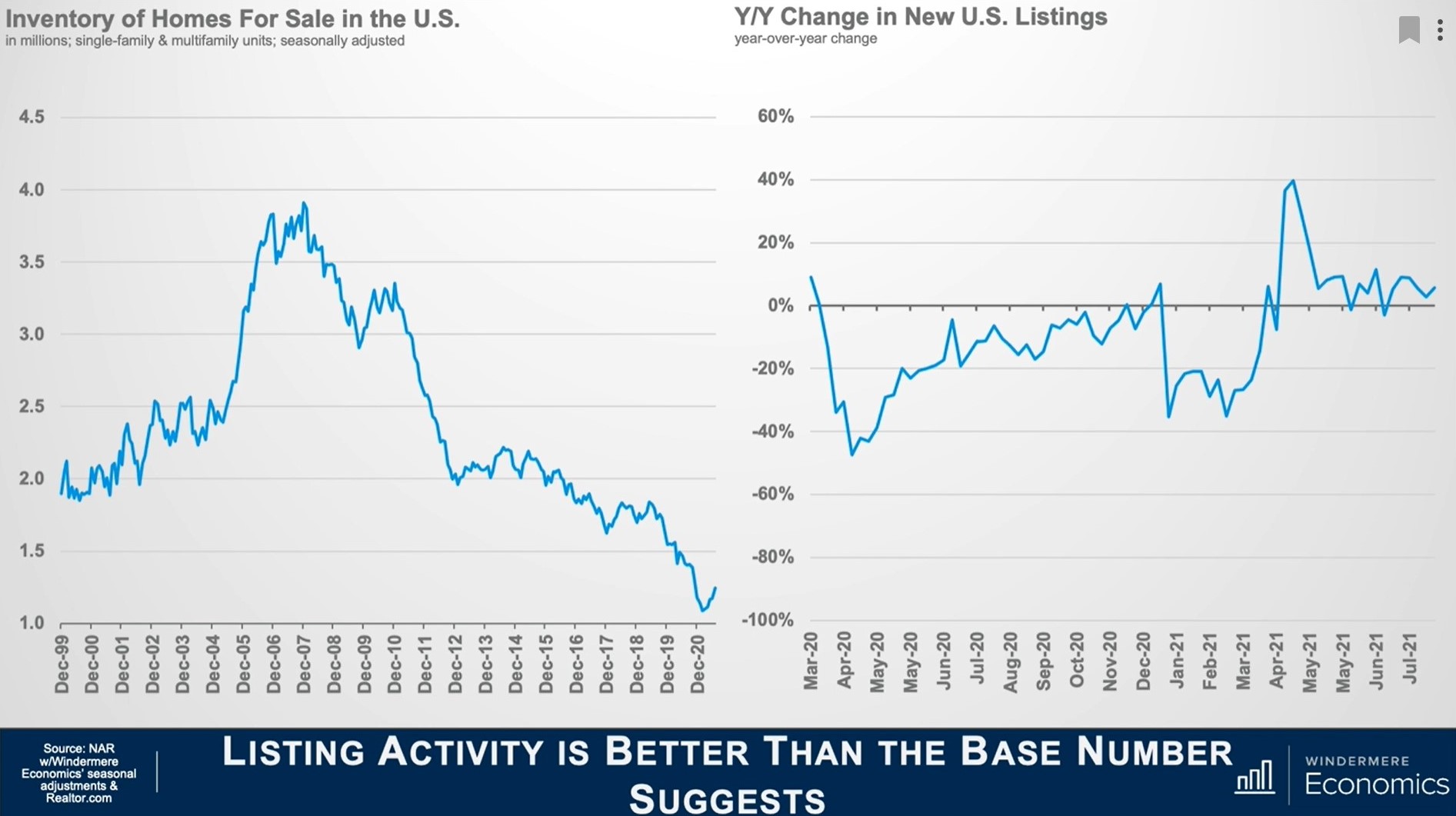 Since new listing activity is still pretty robust, it has allowed sales to tick back up. On a month over month basis, home sales have risen by 1%. Home prices took a little bit of a  breather in July and dropped by .8% month over month but they are still 17.8% higher than seen a year ago. 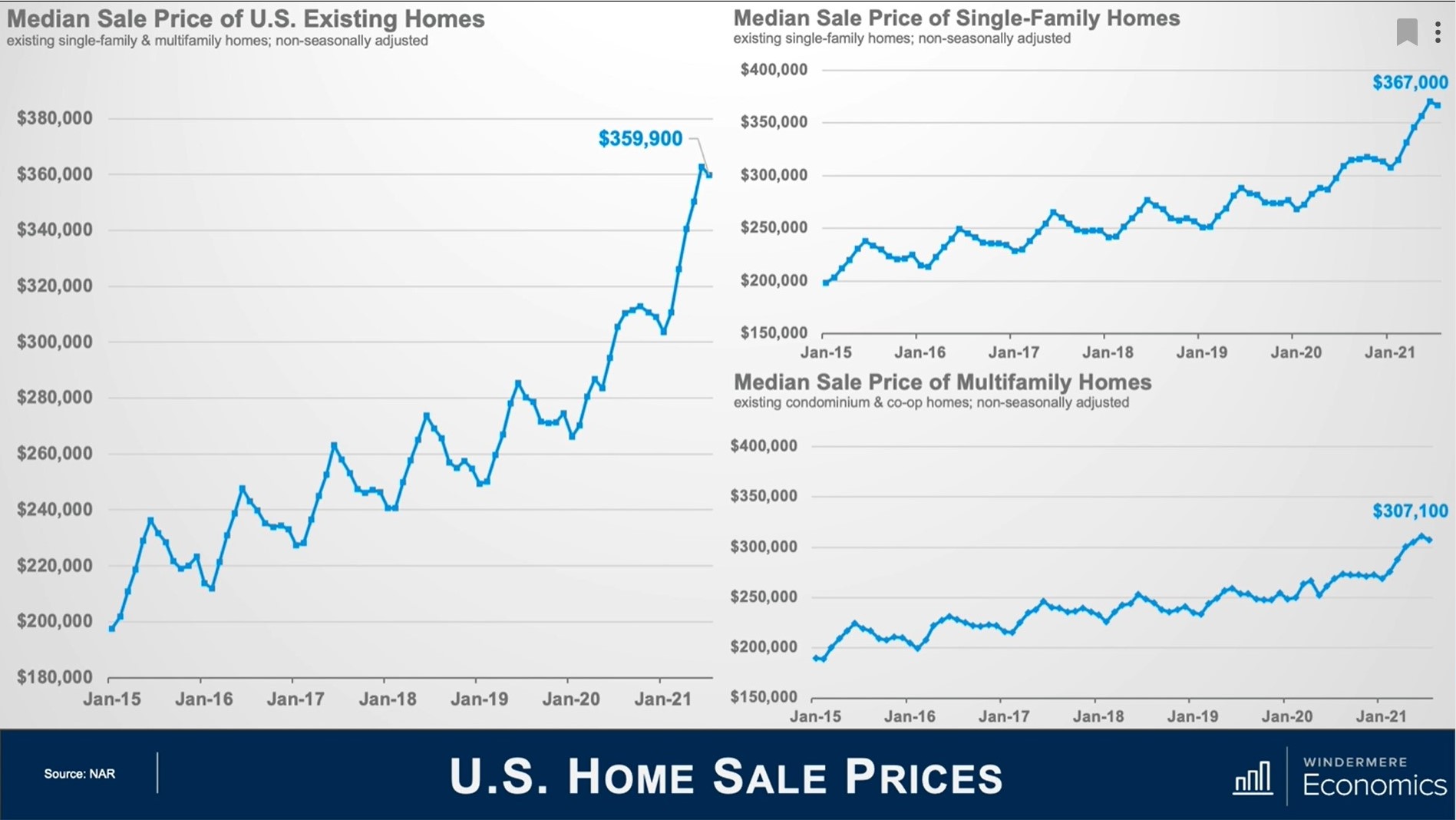 Overall, we are still quite far away from experiencing a normal housing market..

Looking for an economic update on the Real Estate Market each month? This page provides monthly videos from Matthew Gardner (Windermere's Chief Economist) about all his predictions for what's ahead in this crazy housing market. You will also find highlights from the videos if you do not have time to watch!

Update on Homes in Forbearance

This was a great month to look at the data for the number of homes in forbearance as the program stopped taking new applications at the end of June. The situation today is a vast improvement from where we were last may. More than 4.76 homes were in the program last May, but by […]
Read More →

Is a Housing Bubble on the Horizon?

Today’s Monday’s with Matthew looks a bit different. While this 30 minute video is longer than the others, it is full of great information regarding the history on the housing crash in 2007 and whether or not we are in the midst of a housing bubble.
Read More →

Matthew Gardner’s latest video on the housing market is full of important information regarding inventory, mortgage rates, future predictions, and new home builds. There continues to be an extremely limited amount of inventory, but Gardner is still expecting that the number of home sales will increase by more than 11% compared to last year. With […]
Read More →

Matthew begins with information on the current home ownership rates and dives into the data regarding home buying and the younger generation. The ownership rate for millennials is increasing and the current rate of 38.5% is a share not seen since back in 2011. Gardner believes this number will continue to rise over the next […]
Read More →

Matthew came out with his first video for 2021 and it’s full of great information! If you don’t have time to watch the full video we have provided some highlights below. Starting with The National Association of Home Builders report we can see that the index has slipped from 86 to 83, but builder’s still […]
Read More →

This past year mortgage rates have broken record lows, and we have watched them drop week after week. Matthew Gardner predicts that rates will most likely bottom out in the current quarter but he doesn’t see mortgage rates increasing significantly next year. Regarding existing home sales, Matthew Gardner forecasts that sales should be up by […]
Read More →

The Latest US Home Sales Data

Quick Update from Matthew Gardner: How Will Election Results Impact the Housing Market? Michael Hyman is the National Association of Realtor’s Research Data Specialist. Below is his most recent article from November 13, 2020, discussing the housing affordability index, median family income, and mortgage rates. “At the national level, housing affordability declined in September 2020 […]
Read More →

Analyzing the US Job Market

Jobs continue to return, but the pace has slowed significantly. The country added 638,000 jobs in October, which was surprisingly strong due to the current rate of COVID-19 cases. It’s good to see the unemployment rate drop, but the amount of people who have been unemployed for more than six months has increased by 1.2 […]
Read More →

At the end of Matthew Gardner’s video he states that the housing market continues to outperform, but the pace of price growth is not sustainable and while it has to start tapering off at some point it isn’t quite there yet. Check out the graphs below or watch his video to see what was […]
Read More →

What this means in layman’s terms, is the low interest rates have fueled the housing market. This is causing home values to go up faster than interest rates are dropping. As a result we could find many buyers getting priced out of the market. When buyers exit a sellers market, supply and demand is affected. […]
Read More →

I hope you enjoy our economic update, if you have any questions regarding the housing market or would just like to chat please feel free to reach out to me here.