Matthew Gardner’s latest video on the housing market is full of important information regarding inventory, mortgage rates, future predictions, and new home builds. There continues to be an extremely limited amount of inventory, but Gardner is still expecting that the number of home sales will increase by more than 11% compared to last year. With such a significant upswing in home prices, over 30% of homeowners currently have more than 50% equity in there homes!

Diving into mortgage rates, it is clear that the rates began to jump in early February and it is pretty unlikely that they are going to go back down anytime soon. The spike is due to the widely distributed COVID-19 vaccine and as the country begins to open up more we will see a significant boost in economic activity. With so many receiving the vaccine, it is expected to see a boost in economic growth in the second half of the year and the potential for inflation to rise is now elevated, which has caused one thing- a move out of bonds. Specifically, 10 year treasuries, which means that interest rates for these bonds have to rise to attract more buyers and the interest rate on 10 year paper directly impacts mortgage rates.

Although, rates still remain remarkably low! The prediction for rates this year are expected to rise to an average of 3.6% by the fourth quarter of 2021. It won’t be until early 2022 that rates may creep back into the 4% range. Gardner mentions that inflation will level off after a short period of time and not get out of control. Although, if we do see an ongoing spike in inflation there is the potential for mortgage rates to rise faster than he is currently anticipating. 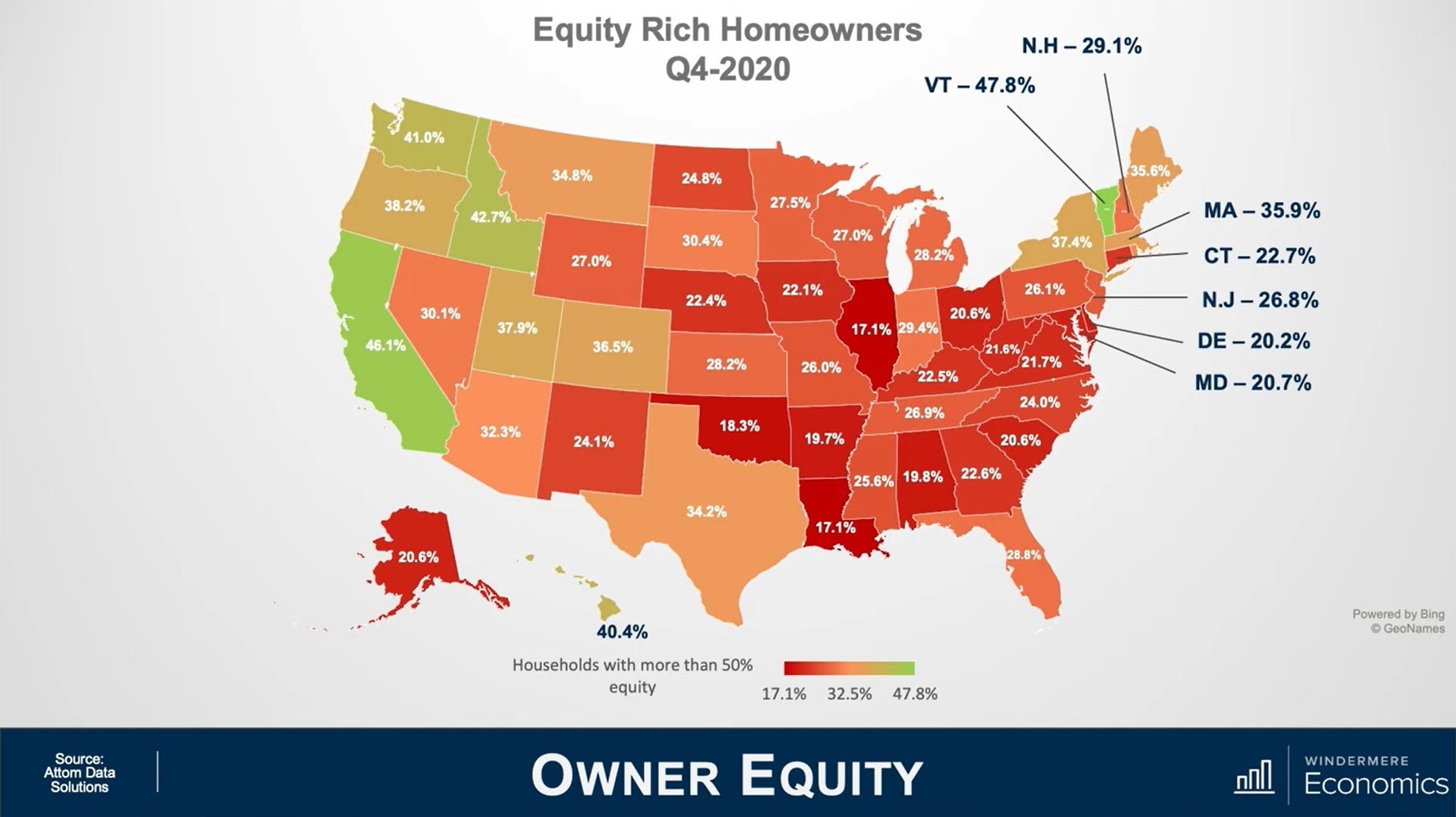 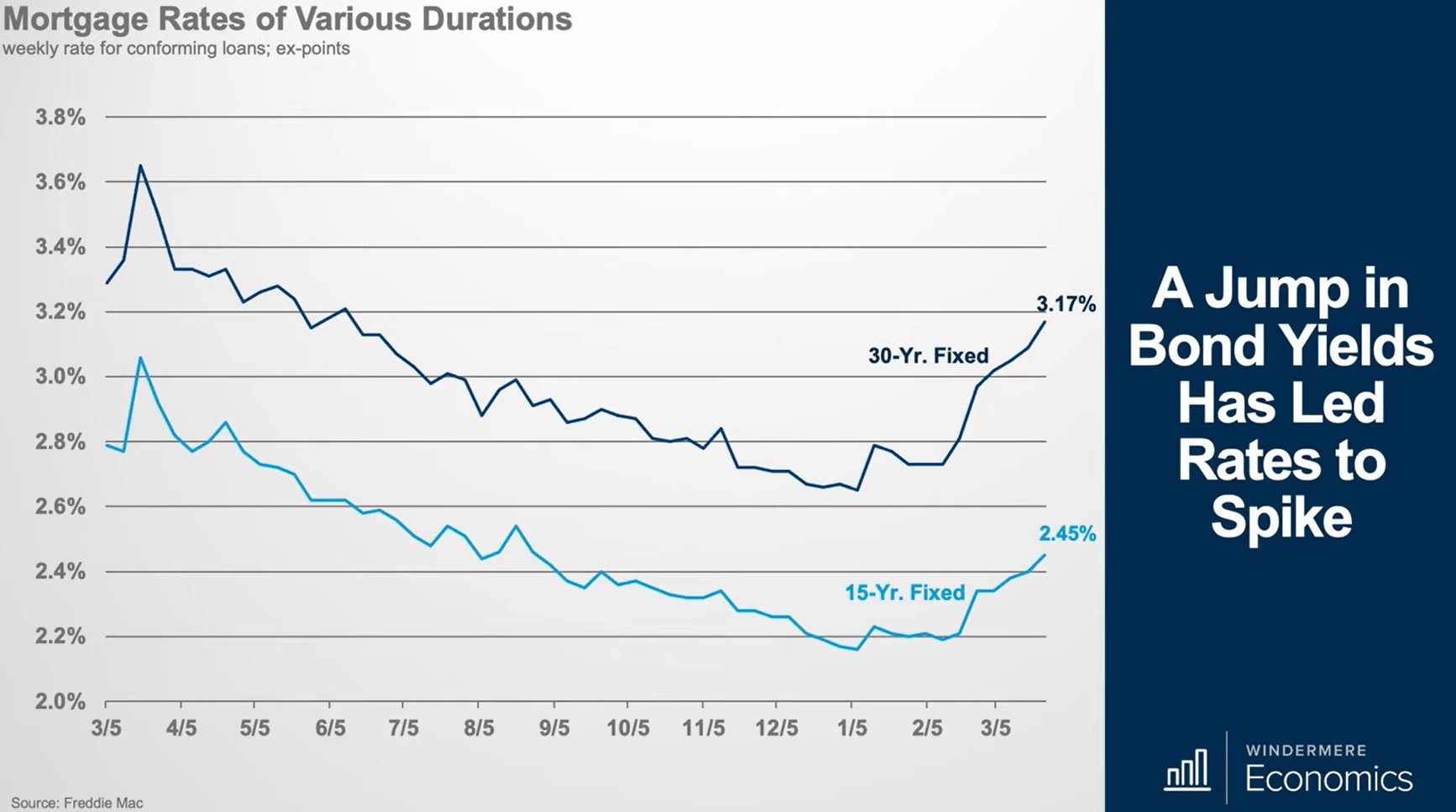 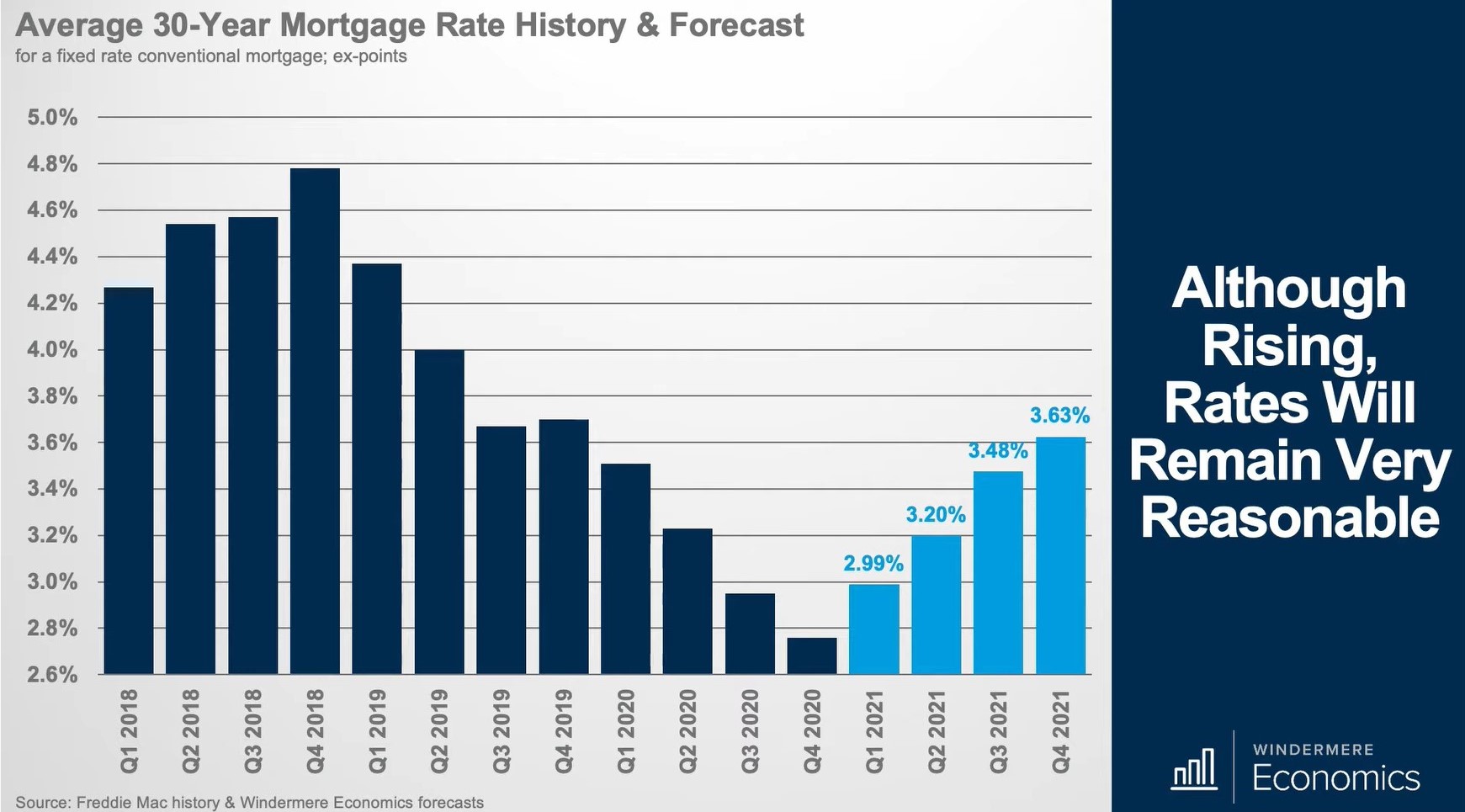 Moving on to new homes, home starts are down by 8.5% and single family permits are down by 10%. Builders are slowing down production due to lumber and material costs continuing to increase. Future construction is also at risk due to the limited amount of materials available, including appliances! Many projects have been put on pause due to cost, as lumber prices have increased by more than 180% since last spring. The price spike has caused the price of an average new single family home to increase by more than $24,000. On a positive note, the Futures price has been dropping and that may mean we are getting closer to the end of the massive increases in lumber prices.

Lastly, the National Association of Home Builders put out an analysis which suggests that the recent rise in mortgage rates over the past couple of months has priced over 1.3 million households out of the market for a median priced new home. Affordability is becoming even more of a major concern, as almost 58% of all households in the country cannot afford a median priced new home.

With all that being said, the bottom line is we need home price growth to slow and we need more inventory! 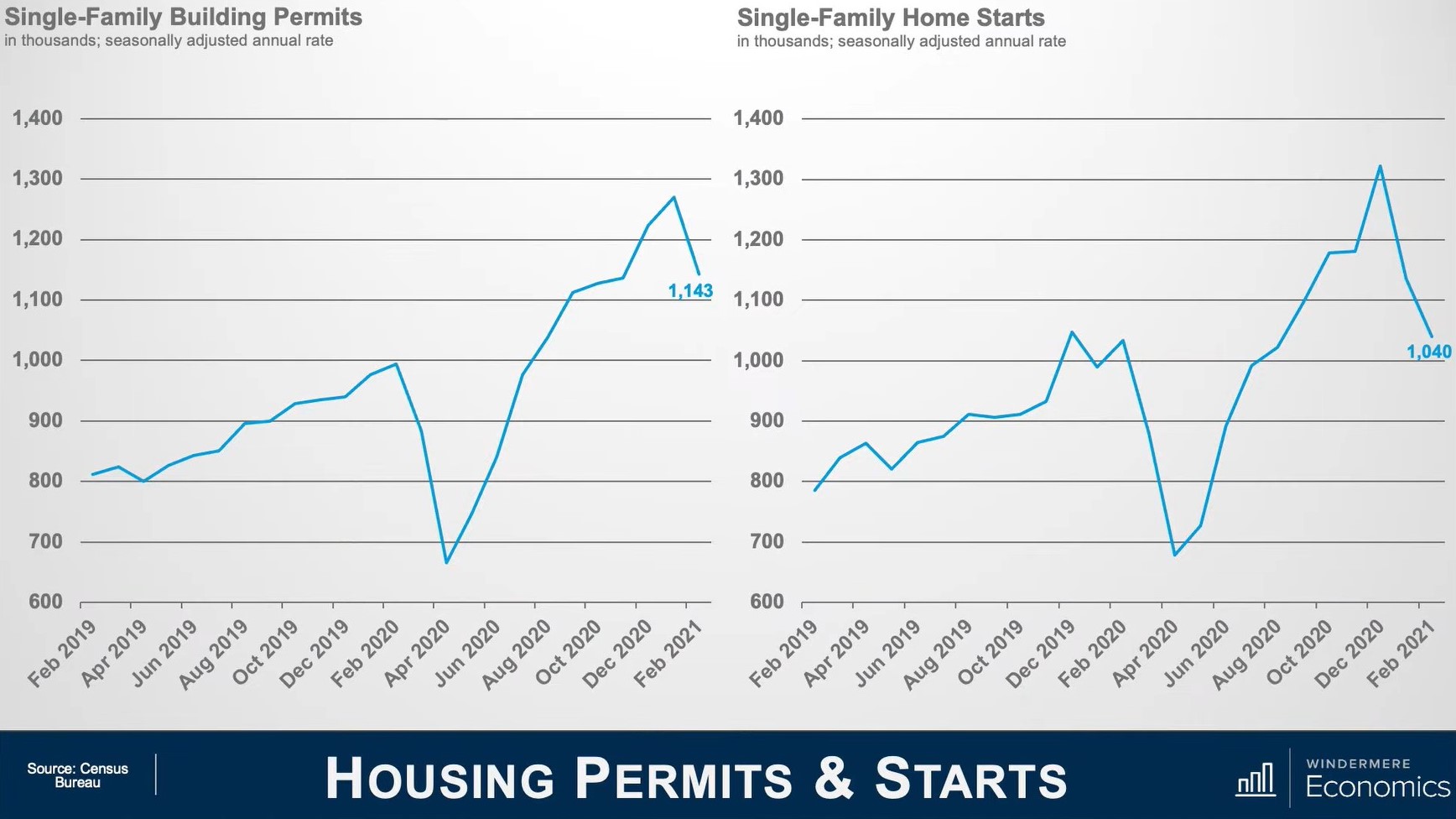 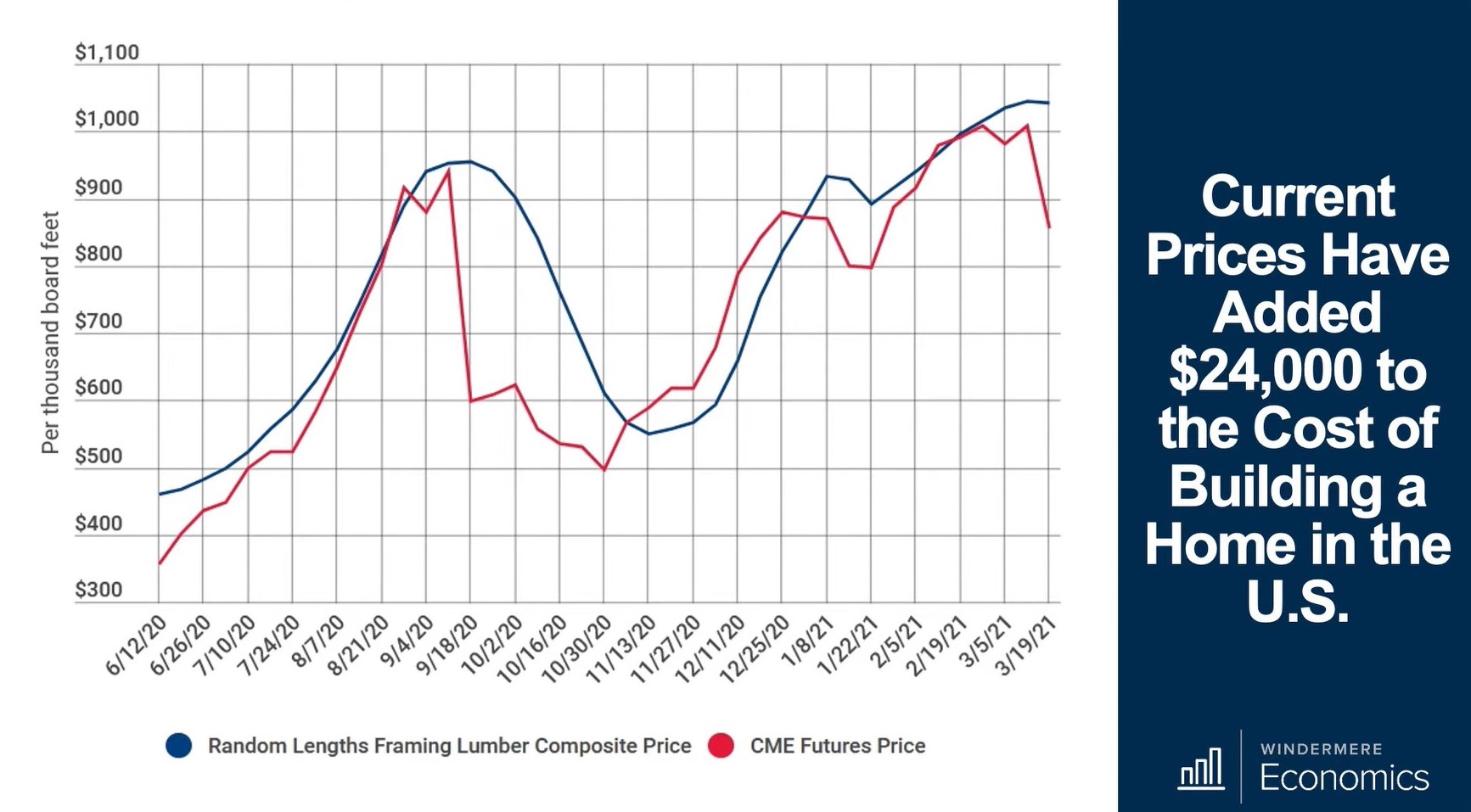 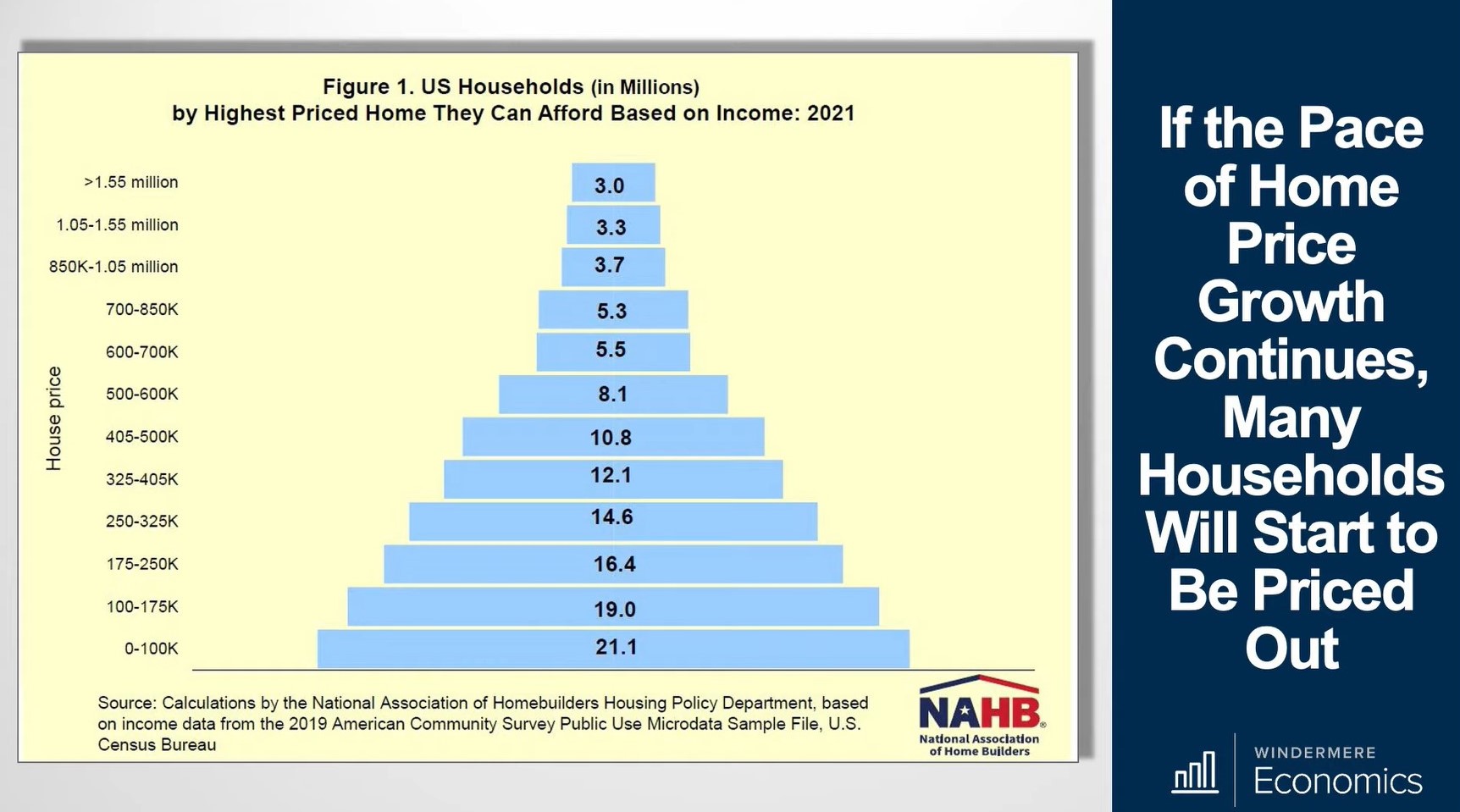 Related Articles
Monday's With Matthew A Master Class In Mortgage Rates This months Monday’s with Matthew focuses on mortgage rates and what we can expect for the future. Gardner gives a crash course on how mortgage rates are set. There are many factors that impact the rate a homebuyer will get, which include credit scores and loan to value ratios, but the base rate is set […]
Monday's With Matthew How Do Buyers & Sellers Feel About the Housing Market?   This months Monday’s with Matthew focuses on the latest Home Purchase Sentiment Index Survey. This is a survey that focuses primarily on housing and it shows the responses of 1,000 consumers across the country. Gardner shares data about about the housing market regarding buying, selling, and if home prices will go up or down […]
Monday's With Matthew Housing and Economic Update   Gardner jumps right into the data releases that came out in August and starts with the new housing permits and starts. New home permits (single family permits) fell by 17% in July and they have been heading backwards since March. Although we have seen a pull back over the past few months the trend […]