Are We Approaching Bubble Territory in the U.S. Real Estate Market? 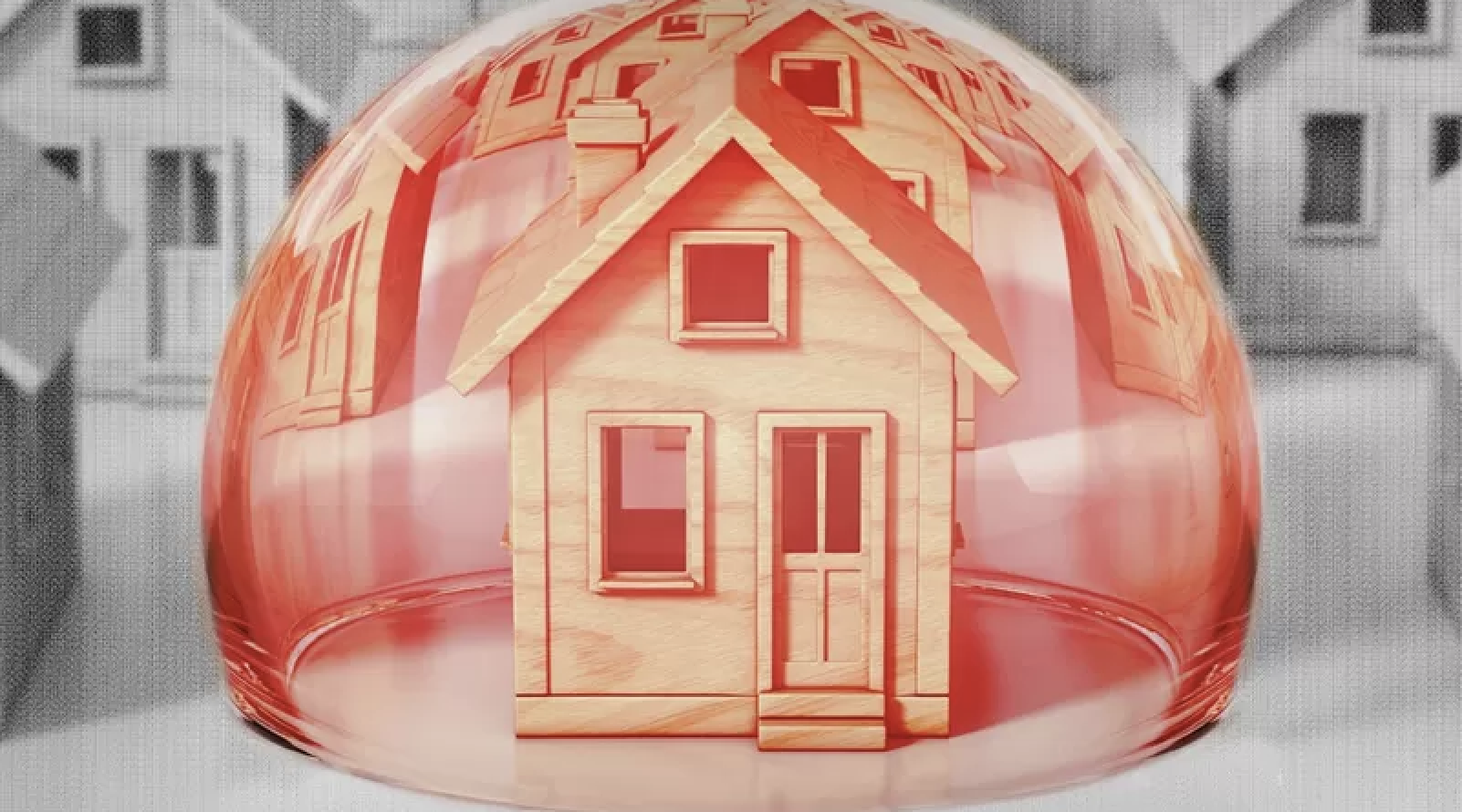 Over the past two years, the nation has watched worriedly as home prices seemed to hit a new record high every month. Many buyers have been offering six figures over asking prices to snag properties. It’s been uncomfortably reminiscent of the runup to the housing bust that blew up the world’s economy roughly 15 years ago.

As the market has progressively heated to a boiling point, most real estate experts swore up and down that the housing market wasn’t in a bubble. Mortgage interest rates were so low, in the unprecedented mid-2% range, that buyers could afford the inflated prices, they said. Lenders were no longer making bad mortgages that could trigger another foreclosure crisis. And this time around, a housing shortage that has reached crisis proportions has resulted in many more buyers than properties for sale—just the opposite of the 2007–08 pre-crash conditions. This market could support the frenzy, they explained.

But that might not be so true anymore with mortgage rates soaring to their highest point in more than a decade, hitting 5% last week as they continue their upward march. Many of those same experts are now warning the housing market might be approaching a bubble—if it isn’t in one already.

There’s only so much that homebuyers can afford before they’re priced out of the market. In March, when rates surpassed the 4% mark, the number of buyers applying for mortgages fell 5%, according to the Mortgage Bankers Association.

Nationally, buyers are paying about 42% more in their monthly mortgage payments for the same house today than they did a year ago. The potent combo of rising home prices, up 14% year over year in March, and escalating mortgage rates, which rose nearly 2 percentage points, has added hundreds, if not thousands, of dollars a month to those mortgage bills.

And that’s on top of what potential buyers are spending on everything else. Rents are up about 17% year over year, inflation is running at 8.5%, and gas prices rose about 40%. Many folks are simply tapped out.

How can the system handle skyrocketing home prices, mortgage rates, and rental prices simultaneously? Some believe it can’t.

“We’re not in a housing bubble just yet—but we’re skating close to one if prices continue rising at the current pace,” says George Ratiu, manager of economic research at Realtor.com®.  “Some markets will see a correction if mortgage rates continue to rise, in which sales will drop and prices will follow.

But “I don’t expect the market to see a huge crash or spike in foreclosures,” he adds.

Ratiu anticipates prices could fall 5% to 15%, depending on the local real estate market. Areas with struggling economies without the good jobs needed to attract new residents, such as the Rust Belt, would likely see larger price declines. Prices are already tumbling in places like Toledo, OH, and Rochester, NY.

But buyers expecting some pricing relief will likely be disappointed. Even if prices do fall, homebuyers will still be saddled with higher monthly mortgage payments. Rates have risen so much, so quickly, that they will likely more than make up for lower prices, costing homebuyers even more money.

And more desirable communities with plenty of high-paying tech and manufacturing jobs could see prices still continue to rise.

It’s going to take a little time for higher mortgage rates, which averaged 5% in the week ending April 14, to have their full impact on the housing market. (Mortgage rate data is from Freddie Mac.) And in the near term, many more buyers are likely to rush in and offer as much as they can to secure homes before rates rise even further.

(Mortgage interest rates are expected to keep going up this year as they’re influenced by the U.S. Federal Reserve’s short-term interest rate. The Fed plans to raise its rates several more times this year in an effort to curb high inflation. That’s expected to push mortgage rates up.)

Home price growth is beginning to slow a little. Median list prices were up 14.9% over the prior year in the week ending April 9, according to the most recent Realtor.com data. While that sounds high, it’s a little lower than the 15.3% annual price increases of the past two weeks.

It won’t drop by much more until buyers realize just how much these higher mortgage rates will eat into their budgets and start making lower offers or dropping out of the market entirely. If they see prices eventually dip, they might wait to see if they go down even further, which could lead to just that occurring.

“People go from ‘I need to lock in before it goes any higher’ to ‘Honey, we can’t afford this anymore,’” says Patrick Carlisle, chief market analyst in the San Francisco Bay Area for the real estate brokerage Compass.

Then it needs to sink in for home sellers that they might not be able to get as much as they wanted for their residences.

“Sellers are pricing homes based on the market three months ago—not the market of today’s interest rates,” says Ratiu.“We’re in a period of transition where sellers are looking at the lack of homes on the market and current, record-high prices and are assuming the market will continue like this.

“I’m expecting to see price adjustments as we move into the spring and the summer,” he continues. “Sales will drop before prices adjust.”

Is the U.S. in a housing bubble?

While home sellers and buyers are clamoring to know whether the housing market is in bubble territory, real estate experts haven’t yet reached a consensus.

“The housing market has become bubbly,” says economist Enrique Martínez-García of the Federal Reserve Bank of Dallas. He was one of the authors of a recent report finding signs of a housing bubble in the real estate market. “This looks a lot like the housing boom that we saw prior to the 2007–09 financial crisis.”

Others, like Carlisle and Wolf, aren’t as sure. However, all three believe there could be a correction in the housing market, which would lead to falling—but not crashing—prices.

It’s like “air escaping an over-pressurized tire through a very small puncture. The tire is not going flat quickly, but it will get slowly softer,” Carlisle says.

Martínez-García anticipates the double-digit price growth experienced during the COVID-19 pandemic could slow to about 2% a year. But he warns that corrections between 5% and 10% “are not completely out of the question.”

A correction is very different than a bust in that it’s not a huge, immediate drop that affects the whole nation at once. And a correction doesn’t have to be a very large price decrease. It could just be a few percentage points as the market cools off and adjusts to higher rates that cost buyers hundreds of dollars more each month.

“A universal drop in home prices across the entire the country is rare,” says Wolf. However, “we need to be realistic that prices could eventually come down a bit.”

The last bust was precipitated by shady loans that ballooned in size after a few years. Many homeowners couldn’t afford the higher payments, so they defaulted on their mortgages and their homes fell into foreclosure. This resulted in cheap homes flooding the market at the same time that the economy imploded, scores were laid off, and there just weren’t enough folks who wanted to purchase them. So prices plummeted, falling about 30% by some estimates.

The market looks very different this time around. There are many more buyers than homes for sale. And another foreclosure crisis seems unlikely as those riskier loans no longer exist. The vast majority of homeowners locked in fixed-rate loans that don’t result in monthly payments very suddenly surging. So unless there is another recession followed by high unemployment, they’re much less likely to be in danger of losing their homes.

And not everyone believes prices will ebb.

“What causes home prices to fall is being swamped [with homes for sale],” says Greg McBride, chief financial analyst at Bankrate.com. He expects prices will eventually flatten out and stay put for the next few years. “[Instead] we’re at record low record levels of supply.”

There will also likely be buyers as well as investors who can afford the higher rates, or are buying in cash, who will keep the housing market strong.

“Financially, many buyers are in a position to still commit to buying a home,” says Ratiu. “The main challenge is from one week to another they’re watching mortgage payments jump up hundreds of dollars a month. It’s bound to be discouraging.””

Are We Approaching Bubble Territory in the U.S. Real Estate Market?

Related Articles
Buyers Is the sky falling in real estate? June 20, 2022 – Is the sky falling in real estate? Below is a video on Mike’s thoughts on the state of the current Real Estate Market! Click Here to watch the video from Marcus and Millichap!
Buyers 4 Reasons Why the Election Won’t Dampen the Housing Market Tomorrow, Americans will decide our President for the next four years. That decision will have a major impact on many aspects of life in this country, but the residential real estate market will not be one of them. Analysts will try to measure the impact feasible changes in regulations might have on housing, the effect […]
Buyers The Latest Housing Data At the end of Matthew Gardner’s video he states that the housing market continues to outperform, but the pace of price growth is not sustainable and while it has to start tapering off at some point it isn’t quite there yet. Check out the graphs below or watch his video to see what was going […]